Breaking the Auction and Removal Record for Walnut Hill 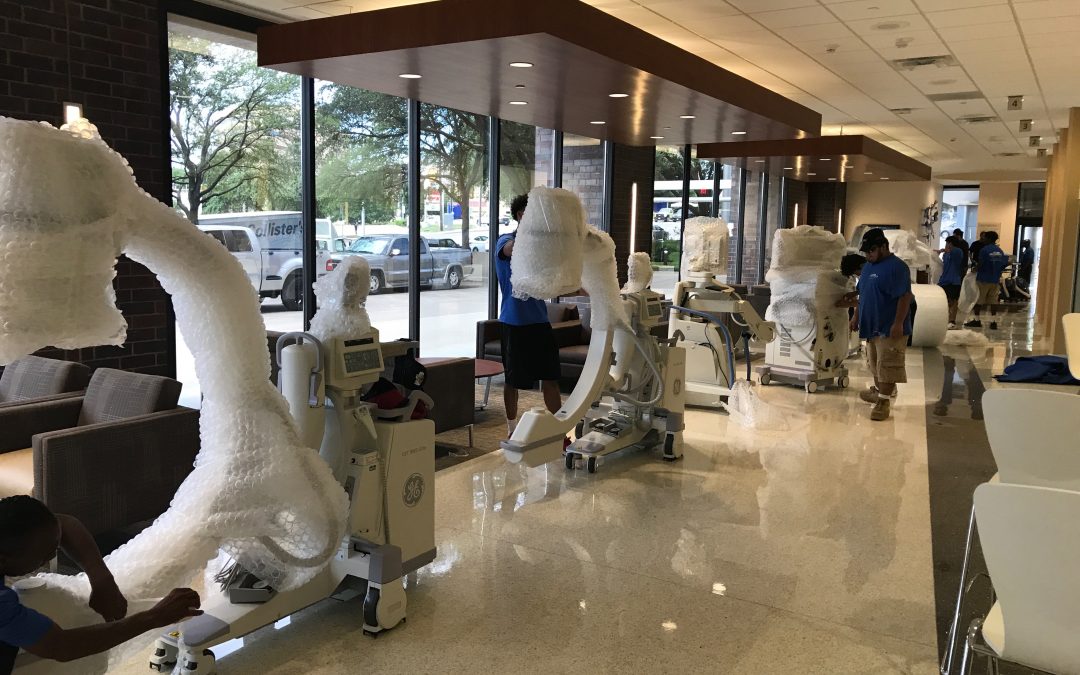 Private Dallas medical center Walnut Hill closed abruptly on June 2, 2017, three years after opening its doors. A trustee was assigned to oversee the closure and hired BidMed with a three-week deadline.

In 23 days, BidMed organized the sale and removal of over 90% of the facility’s equipment and supplies. They exceeded the total estimates given to their clients by $3 million.

Working with a Three-Week Deadline

Walnut Hill’s $100 million dollar, 100-bed facility had boasted private suites, chef-cooked meals, and a movie theater. The property also included “tens of thousands of items of hospital equipment, goods, and supplies as well as a wide variety of state-of-the-art medical equipment,” according to Munsch Hardt, the firm that represented Walnut Hill’s trustee and oversaw its closure.

BidMed succeeded in drastically altering the sale’s scope, expanding from just $100k in supplies to including 90% of the hospital’s fixtures.

After Walnut Hill filed for bankruptcy, the trustee in charge was referred to BidMed, who had a mutual acquaintance in the industry. He hired BidMed to sell all Walnut Hill’s personal and leased property on July 8, just three weeks before the building had to be cleared on July 31.

“Conducting the auction and removing property sold in such a short time frame is highly unusual in a bankruptcy case—indeed, I have never seen such an auction conducted within this short of a timeframe,” stated Jason Enright of Munsch Hardt in his recommendation letter.

The seven creditors who had financed all the equipment were concerned that their assets would be liquidated for pennies on the dollar. Walnut Hill’s trustee leveraged BidMed’s expertise to help persuade them, and the team worked to set conditions of sale, promising to meet certain reserves in exchange for participation.

“Knowing the value of used equipment, we could make an evaluation based on our network of buyers and the matches with hospitals and facilities,” said BidMed Co-Founder and President Joanne Frogge. “We were confident of the numbers we could hit.” At the end of the week, BidMed had succeeded in drastically altering the sale’s scope from $100k in supplies to 90% of the hospital’s fixtures.

With just two-and-a-half weeks left, BidMed inventoried the entire hospital within four days while also petitioning for court approval of the sale. The approval was granted on July 17, allowing BidMed to begin marketing and advertising for the sale on July 25. By July 26, all the assets had been sold.

After the auction, the BidMed team had 6 days to pack and ship all the sold items, including five cath labs and six full operating rooms.

Racing to the Finish Line

After the auction, the BidMed team had 6 days to pack and ship all the sold items, including five cath labs and six full operating rooms. It took a crew of 40 team members working in shifts for 24 hours and a special rigging team to remove larger items with a crane and forklift.

Because there was no loading dock, BidMed kept several vans on site at all times. They built a makeshift yard in the parking lot where custom pallets and boxes were assembled for packing.

A few days before the deadline, several hospital representatives picking up their purchases onsite became interested in some of the unsold assets. The owner, GE Healthcare Financial Services, was asked to name their buyout price and agreed to sell if BidMed could match the required estimate. BidMed not only met GE’s asking price but so far exceeded it they covered their own and the trustee’s fee for managing the liquidation.

“We couldn’t have done it in 23 days without our tech. The only reason I feel confident doing proposals today is because of the tech.”
– Joanne Frogge, BidMed President & Co-Founder

The final sale was agreed on during the last weekend (July 29th-30th). BidMed organized payment overnight so the assets, including two further cath labs, could be released. At the last minute, trustee’s counsel negotiated with the landlord for an extra day and BidMed removed the final piece before the end of August 1.

With a previous “best time” of 45 days from start to finish, BidMed broke its own record by three weeks and has yet to beat their six-day removal time.

Co-Founder and President Joanne Frogge attributes the success of the Walnut Hill project to their team’s expertise and advanced software platforms. “We couldn’t have done it in 23 days without our tech. The only reason I feel confident doing proposals today is because of the tech.”